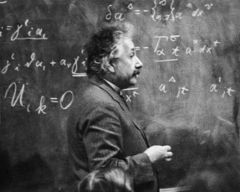 The theory of relativity has enriched physics and astronomy during the 20th century. It changed perceptions. For example, it overturned the concept of motion from Newton's day, into all motion is relative. Time was no longer uniform and absolute, as related to everyday experience. Furthermore, no longer could physics be understood as space by itself, and time by itself. Instead, an added dimension had to be taken into account with curved spacetime. Time now depended on velocity, and contraction became a fundamental consequence at appropriate speeds.

An Albert's quote, and we will not translate it. Translate APIs are great, but they would probably ruin the quote. This is an example of how a web page's part can be excluded from the translation:

“A human being is a part of a whole, called by us _universe_, a part limited in time and space. He experiences himself, his thoughts and feelings as something separated from the rest... a kind of optical delusion of his consciousness. This delusion is a kind of prison for us, restricting us to our personal desires and to affection for a few persons nearest to us. Our task must be to free ourselves from this prison by widening our circle of compassion to embrace all living creatures and the whole of nature in its beauty.”